Beanish is the language spoken by a group of people (identifiable by their black beanie hats) that Cuegan encounters while looking for help for Megan's leg wound. Beanish appears in the comic as a set of unknown symbols in the speech bubbles of the Beanie people.

For a detailed analysis of Beanish, see https://beanishlang.wordpress.com/

Relation to Other Alphabets[]

Although Beanish resembles various Outside alphabets and scripts, it does not match any one language.  Only a couple of individual symbols (like ᘛ) have been identified in other alphabets.

As of the eighth Beanish speech, here are the known symbols:

It is later confirmed by Cueball that the sequence of characters constituting the 7th speech, and repeated 2 more times in the 8th speech (once by Cueball, once by Beanie) is most likely translated as either "water" or "drink."

As proposed by Sinus.pi (talk) 23:00, July 11, 2013 (UTC), this attempts to write Beanish as closest visual representatives in the Latin alphabet. 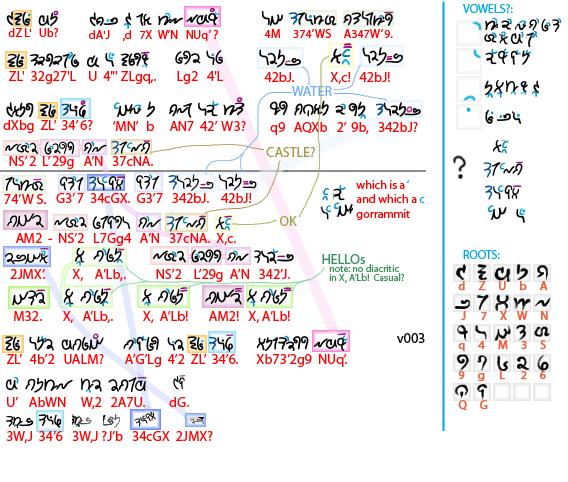 The dialogs can thus be written as:

Tresoldi's transliteration is more accurate, but uses non-Latin letters. It may be viewed here.

Community content is available under CC-BY-SA unless otherwise noted.
Advertisement